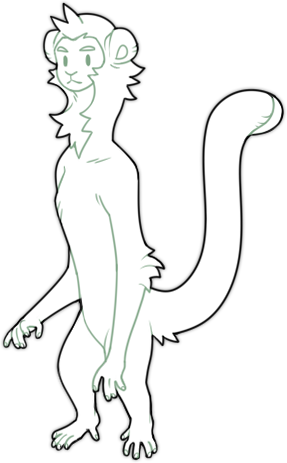 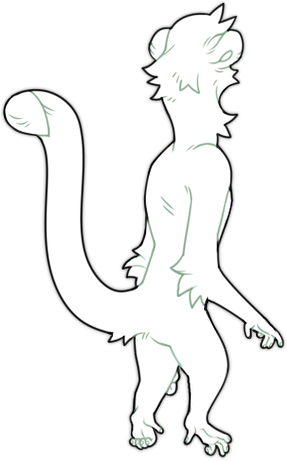 Chimia are natural acrobats, being both dexterous & nimble. They are social and intelligent, able to pick up multiple languages easily (none are as quick paced as their own langauge, Chimirish, which is used as a synonym for 'gibberish' by other species). Chimia are a touchy-feely species, prone to climbing on others without hesitation.

Chimia historically have always had a close relationship with the Tolka, with many of their ancient communities living together. This tends to remain true in modern times-- chimia enjoy the protection and physical support the tolka offer, while the tolka are one of the few species consistently patient enough to endure the chimia for generations.

Chimia are the most active and lithe.

Stronger and larger chimia tend to be older or have calmer temperaments, and are generally easier to approach by other species. 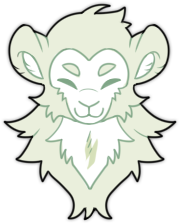 The face is fur-less. Hairline shape can vary, between low, high, peaked, round, heart shaped, etc.

The shape of fur around the cheeks also varies, or can even be bare.

Faces cannot be fully furred however.

Face shapes can vary. Snouts can be blunt or a little longer. Jaws can be round or square.

Inner ears can be bare or have fluff. Ear fluff helps to repel water in the ears.

Short ears are the most common for chimia. Many chimia can flatten their ears to their heads to help prevent water from entering.

Longer ears are not unheard of, and are often fluffy! They can often be torn or nicked from getting caught in branches however.

Chimia's mucus membranes can be any color, but natural colors (pinkish) and black are the most common.

Chimia tongues have small barbs like a cat's tongue. Forked tongues are typical, but unsplit tongues ("spoon" tongues) are normal.

Here are some variations on eye shapes and patterns, but you're not limited to these (do whatever you want!). Pupils commonly can dilate to slits or expand in order to maximize vision in both dark and light places.

Lacking eyebrows is possible, but most chimia have even little tufts of hair.

Plated or scaly skin is rarer, but happens. Plated and scaly skin tends to occur where the fur is thinnest-- the hands and the face.

Short, dense fur is normally waterproof and around the body and outer side of limbs. Fluffy dense fur traps air and helps with flotation, and is around the neck, stomach, and tail.

Fur can by any color. Skin tones are normally natural, tinted, or grayish.

Hands and feet both typically have 5 digits but any number is fine.

Claws and webbing are common variations, helping with climbing and swimming respectively. Patagium, aka skin flaps between arms and legs, also sometimes occur and help chimia to glide. 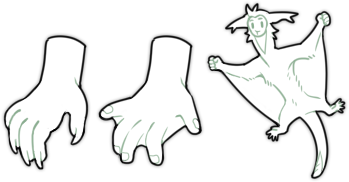 Tail length varies. The average tail is the same length as the body.

Fur can grow anywhere in any length on the tail. Tail tip is almost always white, with a colored spot.

Here are some examples of tail variations. The shape of the tip and base can vary, being both plump or slender. Chimia tails are very strong in general regardless of the shape, able to grab and throw objects.

the use of daemons

The ash element includes physical "aspects" of the world (like Heat [fire] and Flow [water]) and is the most common element. Its users can manipulate one of these aspects to their will. Although ash encompasses all aspects, chimia hold the strongest affiliation with the Beacon aspect.

The distribution tends to be as follows: 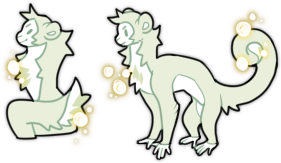